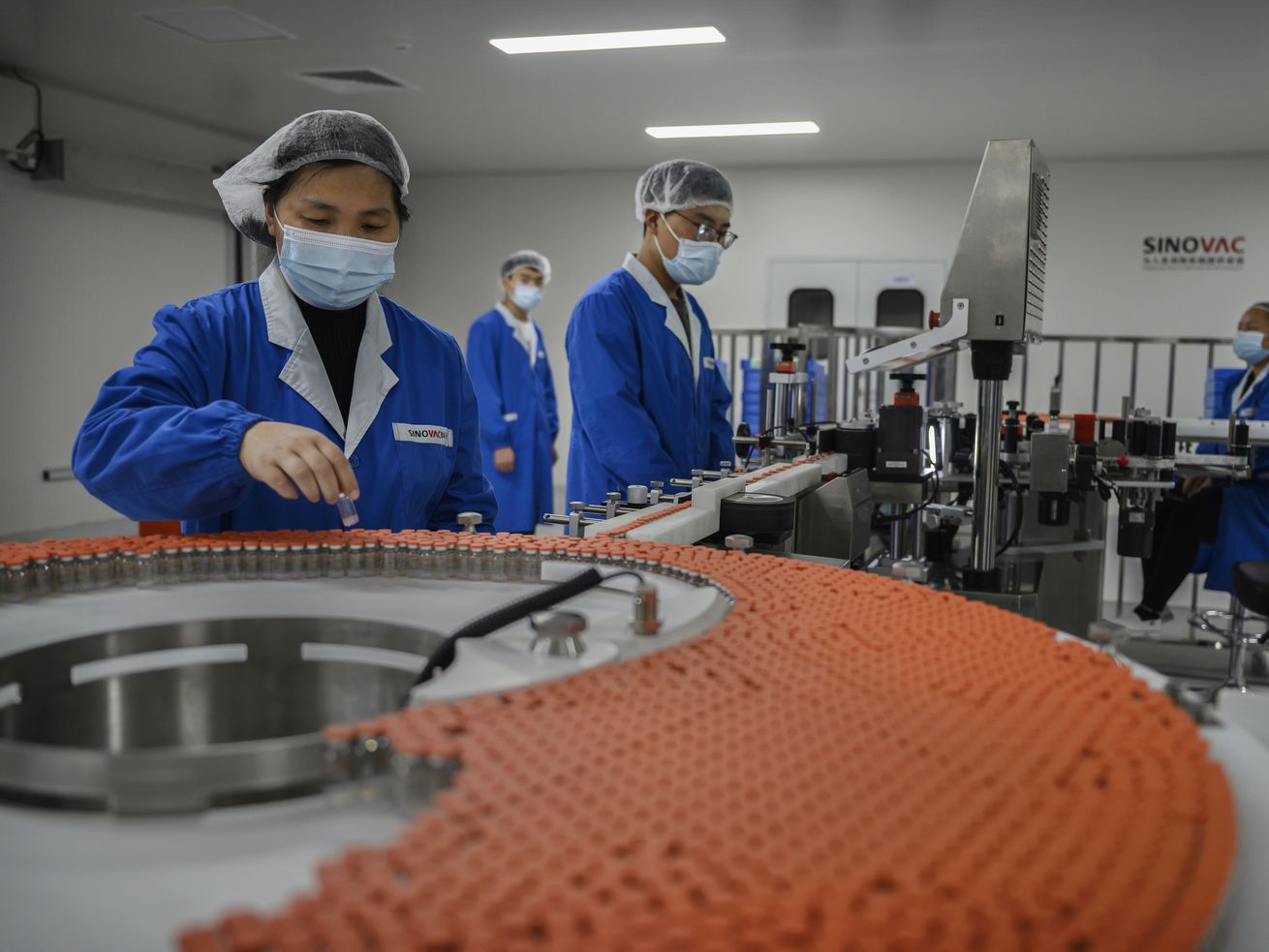 A worker checks vials of potential Covid-19 vaccine CoronaVac on the production line at Sinovac Biotech during a media tour on September 24, 2020 in Beijing, China. | Kevin Frayer/Getty Images

While countries around the world anxiously await the arrival of a vaccine for the coronavirus, a growing slice of the Chinese population has reportedly already been vaccinated. In an interview last week with the Sichuan Daily, the chair of the Chinese pharmaceutical company Sinopharm Group said that its Covid-19 vaccines have been used by nearly one million people in China.

The vaccinations have occurred as part of an emergency use program that began in late July, though few details about it have been revealed by the Chinese government. What we do know is that as part of the program, China’s State Council authorized high-risk groups including medical workers, customs officials, and transportation workers to start receiving one of three Chinese-made vaccines — two from Sinopharm and one produced by Sinovac. But some Chinese cities have also been offering the vaccines to members of the public.

So far, the vaccines appear to have been administered in a decentralized fashion, with a handful of local governments officially announcing availability. People have rushed to queue up for a dose even though transmission remains very low in China and the safety and efficacy of the vaccines has yet to be proven.

Here’s what we know about China’s unconventional approach to Covid-19 vaccination so far, from the risks to the potential for global deployment.

The US is expected to launch an emergency vaccine program soon as well, but under different circumstances. Three major research teams have published initial data on their efficacy and safety. Pfizer and BioNTech, which filed for Emergency Use Authorization for their vaccine last week, reported that it is 95 percent effective based on initial results from the phase 3 trials. These trials test a vaccine on a large segment of the population (tens of thousands of study participants) for efficacy and safety. Two other vaccine makers — Moderna and AstraZeneca and Oxford in the UK — have also released promising phase 3 data showing high efficacy and no serious adverse events for their candidate vaccines.

The three vaccines approved in China’s emergency use program, on the other hand, have yet to report any results from their phase 3 trials. The trials are underway in countries other than China where transmission is still high enough to quickly test the protectiveness of the vaccine. A Sinovac official said they are likely to report initial phase 3 data within the next month.

International public health experts have warned that vaccination before the evidence is in from phase 3 trials could expose recipients of the vaccine to unknown risks without actually protecting them from the virus, if the vaccine doesn’t prove to be sufficiently effective.

Yet Chinese central government officials have defended the program as necessary to protect Chinese citizens, even though Covid-19 cases in China remain very low. Local officials are under pressure to keep transmission at zero, so they have an incentive to allow vaccine distribution in their regions, said Yanzhong Huang, a professor of global health at Seton Hall University.

China is also vying to be the leader in vaccine development and distribution: Chinese companies have five of the 13 vaccines in phase 3 trials. Sinopharm’s vaccines are already being deployed outside China — the United Arab Emirates has also approved the vaccines for emergency use.

“Until now, all our progress, from research to clinical trials to production and emergency use, we have been leading the world,” said Liu Jingzhen, Sinopharm Group’s chair, in the Sichuan Daily interview last week.

Because Sinopharm and Sinovac haven’t released phase 3 data, they are actually behind the leading US and UK vaccine-makers. But these Chinese vaccines have an advantage over Pfizer and Moderna: They don’t need to be stored at low temperatures.

This means that distribution of the vaccines will not be as challenging. And the emergency use program that has been rolled out so far in China shows that mass deployment is already possible — at the scale of nearly 2 million doses, if the Sinopharm chair’s statement is accurate. (Like the frontrunners in the US, the Chinese emergency use vaccines are designed to be administered in two doses.)

“China has always impressed with its ability to carry out large-scale operations since the beginning of the pandemic, including building new hospitals and testing millions of people within a number of days. This just adds to that list of accomplishments,” Li Yang Hsu, an infectious disease expert at the National University of Singapore, told Vox.

How might 1 million people in China already be vaccinated?

In August, the government official in charge of overseeing vaccine development in China, Zheng Zhongwei, said, “In order to prevent the disease spread in the fall and winter, we are considering a moderate expansion in the [emergency use] program.” People in high-risk occupations and high-risk demographics were intended to be the priority recipients.

Since then, news has trickled out about the authorized vaccines becoming available in a number of cities, but not through anything resembling a coordinated campaign.

Zhejiang province appears to be particularly open to administering the vaccines. As of mid-October, the provincial government said almost 750,000 doses of Covid-19 vaccines have been doled out in Zhejiang. The news site Caixin reported that health care workers had received a vaccine at a Hangzhou hospital.

Two other cities in the province, Jiaxing and Yiwu, began offering vaccines in October. These cities are known for their export industries, and workers traveling overseas have been among the main vaccine recipients in China, according to Caixin.

Yet Jiaxing officials said any member of the public with “emergency needs” could sign up for an appointment — not just those deemed to be at higher risk. Recipients of the vaccine have been wide-ranging in other cities as well: NPR’s Emily Feng reported that a Peking duck chef was in line to get vaccinated in Beijing. Chinese students going abroad have also been common recipients of the vaccines, a Sinopharm official told the Paper.

“This is still a decentralized process,” said Yanzhong Huang, “so local governments and vaccine makers, you know, are taking advantage of this regulatory vacuum, to make the vaccine available to the people in China.”

Local governments want to keep the virus completely contained to avoid consequences from higher-ups and the mass testing campaigns and lockdowns that have followed China’s small outbreaks over the previous months. Meanwhile, vaccine makers are making money through the emergency use program, Huang said.

The Chinese public has also been shown to be very open to Covid-19 vaccines. A survey published in Nature found that 90 percent of respondents in China would accept a vaccine — the highest rate among the 19 countries in the study.

Some experts question the logic behind such an early rollout of mass vaccinations in a place where transmission of the virus is so low. “As one of the safest places in terms of Covid-19, it doesn’t really justify the widespread use of the vaccine in the country,” Huang said.

Even as a rising number of people in China are lining up to receive a shot, they have no guarantee that the vaccines they are taking will be effective.

While we await phase 3 data, the clearest picture of the vaccines’ safety and efficacy yet have come are from the smaller phase 1 and 2 trials. Here’s a quick rundown of the results published so far.

Interim results from the phase 1 and 2 trials of the Sinopharm vaccine developed by subsidiary Wuhan Institute of Biological Products published in JAMA showed that the vaccine produced an immune response and recipients had low rates of adverse effects. A study of the phase 1 and 2 results from Sinopharm’s other vaccine, developed by the Beijing Institute of Biological Products, published in The Lancet Infectious Diseases last month, had similar findings.

Last week, results from Sinovac’s combined phase 1 and 2 trials were also published in The Lancet Infectious Diseases. The data shows that the vaccine doses triggered an immune response and did not cause any severe reactions among the 700 people tested, but its efficacy also appears to be lower than other leading vaccine candidates.

“Although the initial data and results of the Sinovac vaccine in early-stage trials are good, it would be more reassuring to also have the results from the Phase 3 trials before mass vaccination occurs,” said National University of Singapore’s Li Yang Hsu.

The risks of using these vaccines before they are proven are wide-ranging. So far, no adverse reactions have been reported, according to Sinopharm and Sinovac executives, but rare side effects may appear as a growing number of people are vaccinated.

Further, if the efficacy for the emergency use vaccines turns out to be low, taking a second vaccine may not be possible because the previous immune response may interfere with the second vaccine, according to the Children’s Hospital of Philadelphia. 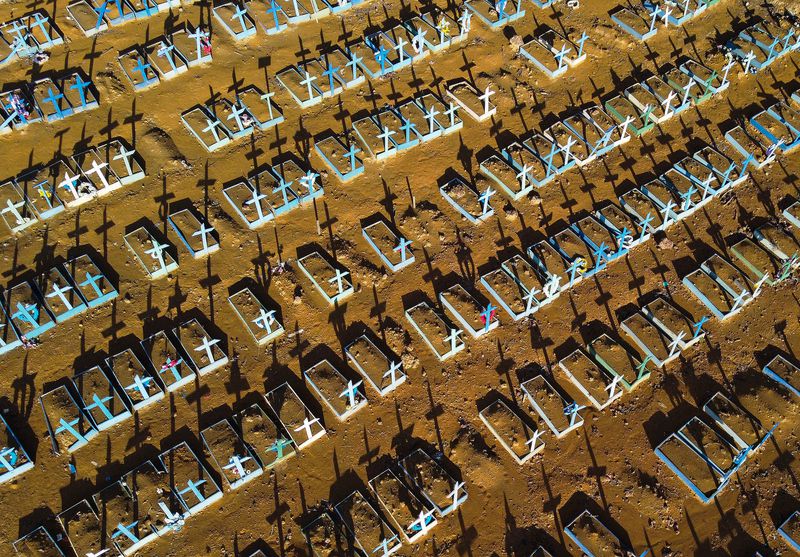 Michael Dantas/AFP via Getty Images
Aerial view of a burial site reserved for victims of the Covid-19 pandemic at the Nossa Senhora Aparecida cemetery in Manaus, in the Amazon forest in Brazil, on November 21, 2020. So far, Brazil and Turkey have signed contracts to buy vaccines from Sinovac.

If the Chinese vaccines do turn out to be sufficiently protective against Covid-19, they may be at an advantage compared to Pfizer and Moderna. Sorting out the cold chain logistics to keep Pfizer and Moderna vaccines at very low temperatures throughout distribution will be challenging, as Vox’s Umair Irfan has explained.

Inactivated virus vaccines, like the three distributed Chinese vaccines, do not have to be kept so cold, and therefore don’t require the same kind of investment for distribution. “CoronaVac could be an attractive option because it can be stored in a standard refrigerator between 2 and 8 degrees centigrade, which is typical for many existing vaccines including flu,” Gang Zeng, a medical manager at Sinovac, stated in a press release for the Lancet study. “The vaccine may also remain stable for up to three years in storage, which would offer some advantages for distribution to regions where access to refrigeration is challenging.”

Zheng Zhongwei, the Chinese official in charge of vaccine development, has said that the country plans to have 600 million doses of vaccine ready by end of this year and 1 billion by the end of 2021.

But many of these vaccines are slated to be sent abroad. So far, Brazil and Turkey have signed contracts to buy vaccines from Sinovac; 6 million doses of CoronaVac are scheduled to be shipped to Brazil by January. China is also participating in Covax, a global initiative to promote the equitable provision of Covid-19 vaccines.

“The number of doses available in China will by far be too little to permit export unless a political decision is taken to ship vaccines to overseas despite still-existing vaccine needs in China,” Klaus Stohr, who formerly ran epidemic response for the World Health Organization, told Nature.

In the near term, as thousands of Chinese people continue to receive emergency vaccine doses, the looming question is whether the phase 3 trials show that the Sinopharm and Sinovac vaccines are in fact safe and effective.